The Flop Shot vs A Bump And Run 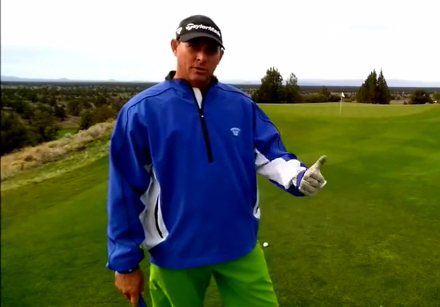 Hopefully, by now, you have mastered the Dream Swing for those 50, 60, 70 yard pitch shots. So now lets turn to those pesky little 25, 30, 40 yard shots. You could, of course, try and flop the ball up there with your trusty lob or sand wedge. But be honest here, what usually happens when you try to flop the ball to the flag? The first likely outcome is that you end up short of the green, and without any roll in the rough, you find your next shot is a chip instead of a putt. On the other hand, you could actually land on the green,  but unless you can really spin the ball, it is difficult to predict how far the ball will roll so you might find yourself in three putt territory.

Of course we all have a buddy that is a magician with the flop shot; but most of us need to consider a shot with a smaller degree of difficulty. And, that is where the bump and run comes in. Whereas the flop shot requires skill, the right lie and flawless execution, the bump and run is more easily learned through practice. In this video David Nesbitt uses a 7 iron to hit a 40 yard bump and run shot onto the green. It would not seem to be a stretch to imagine that the exact same technique can be used, with different clubs, for shorter distances – much like the Dream Swing for pitch shots. So just practice hitting the ball using different irons, and determine which iron works best for different distances – this with, a little practice, can become your go to bump and run shot to the green.

As an added bonus, since the bump and run causes a low flying ball, you should also be able to use the same technique, using for example a 5 iron, to punch the ball down the fairway from under a low hanging tree.

February 28, 2017 presented by Golfers Report in Approach Shots To The Green