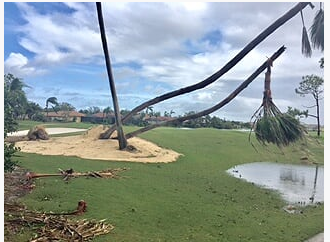 (Photo taken during the eye of the storm)

We live in Naples Florida, and as you know Hurricane Irma came through Naples as a category 4 direct hit, and played havoc with Collier County and Lee County. Each of us here in Naples have experienced some level of damage, and are still facing the after effects with power outages, water and sewer concerns and lack of services.

However, for most of us in our ITL (Inside The Leather) golf group, our homes came through fine with most of the damage occurring to our screen cages and the trees. I was pretty lucky, I only lost power for one night, had one panel of my cage down and lost trees. But it was certainly an experience of lifetime.

With the house shuttered we couldn’t see much, but the sound and fury of 145 mph winds against the shutters, for about an hour, was harrowing. And then just like in the movies, the eye of the storm came through and everything was eerily calm – then the back end of the storm came through, and it started all over again. Below are comments from some of the guys in our golf group, both in Naples and away for the summer, who wanted to share their own experience: