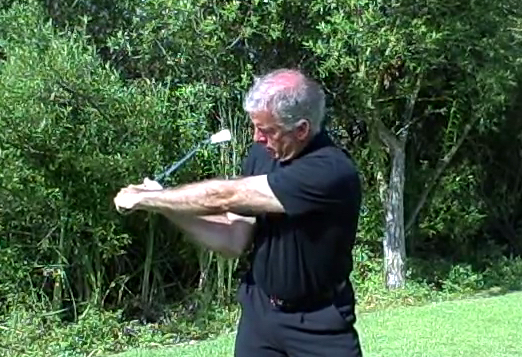 I have been using the Ben Hogan wrist release for about 3 weeks now, and I am hitting the ball longer, and straighter, than ever before. However, what is not mentioned in the video, and maybe goes without saying to the really good players, is that you must be on plane during the backswing and the downswing. So the first thing to work on is staying on plane – I learned this the hard way.

This video by Tom Bertrand, is a second hand tip that he says he got from John(?), who said he got it from Ben Hogan. This lesson’s focus is “laying off the club,” a la Ben Hogan, but the real value of the lesson is in understanding the action of  “releasing the cup, in the back of the left hand.” Either way, it is an interesting concept that visually seems to make sense, because it provides a clearer understanding of what your left wrist should be doing during the backswing, and then on the downswing.

But, you have to wait for it – the first three and half minutes, or so, are background information on “laying the club off” and how he learned the lesson, but then he gets to the meat of the lesson and demonstrates “releasing the cup, in the back of the left hand.” I think this has merit, because it seems to be a relatively easy way to get your club head square at impact.

August 4, 2018 presented by Rman in Keys To A Good Golf Swing