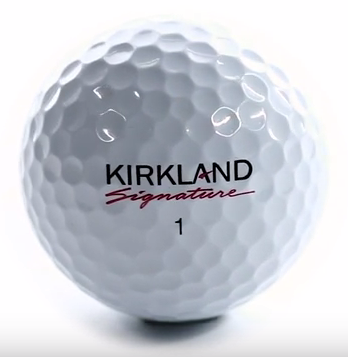 View Video of an independent review (this video is a tad long, but you get the idea in the first few minutes)

Kirkland balls were in stock again for a couple of weeks. And once again they are now out of stock. What gives?

Kirkland balls are now on sale and as popular as ever – oh wait they are out of stock again. I think if you want to buy some Kirkland balls you have to have an in with the inventory manager at your local Costco.

It appears that the Kirkland balls may have been a fluke. If some of the reports are true, Costco may have purchased an overrun of a really good golf ball and relabeled it; not ever expecting the unbelievable demand the balls would receive.  We may never see them again – I’ve already gone through my two boxes.

If you are like me, you probably never even stop to look at the golf balls that Costco sells; and these are generally known brand names. You just assume they are probably the lowest level the brand sells. But, Costco has recently introduced it’s Kirkland Signature four piece golf ball, that sells for $30, for a box of two dozen (that’s $15 a box!). So what, you say? Well, these balls are being compared very favorably to high end brands like the Titleist Pro-v1 and the TaylorMade Tour Preferred X, both priced at $40+ for a box of a dozen.

I once swore that I would never buy meat from a warehouse, but now I have to admit that the Costco rack of lamb is the best. And so it might also be with the Kirkland Signature golf ball. As of this writing the Costco website has 89 reviews, the overall rating is five stars and includes glowing comments and comparisons. I also found a promotional video from Costco, and a video from a golfer who tested the Kirkland Signature against several high end golf balls.

Since my game does not depend on the golf ball I use, I don’t buy $40+ golf balls. But at $15 a box, for a ball that maybe as good as a high end ball, it is certainly worth a try.

By the way, the Kirkland Signature golf balls are made by Nassau Golf Company in South Korea.